ROCKDALE COUNTY, GA—Family and friends are mourning the loss of Jesse B. Hendrick. Mr. Hendrick passed away in his sleep on Monday, Oct. 10, after a long illness. His wife, community activist Josie Dean Hendrick, said he was in hospice care at their home in Rockdale County when he transitioned around 2 a.m. He was 80.

“We had recently celebrated his 80th birthday. He was determined to have a party at the house and we had one for him,” said Mrs. Dean-Hendrick.

Jesse Hendrick was born to the late Lize Zach Hendrick and Ruby Elouise Hendrick in Newnan, Georgia on Oct. 4, 1942. Jesse was the third of nine siblings.

He graduated from Central High School in 1961 in Newnan. A few years later, he was drafted to serve his country in the Army as a sniper in the Vietnam war, where he saw the other side of the world.

As a civilian, Mr. Hendricks worked as an 18-wheel diesel mechanic and HVAC technician. During his spare time, he enjoyed family gatherings, especially when he had the chance to show off his culinary skills on the barbecue grill. 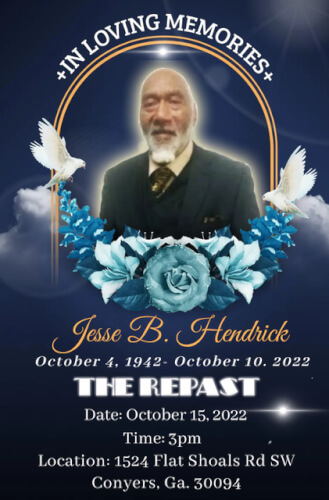